Speaking from personal experience, I have found that planning a  birthday party for teen girls can be quite difficult. Teenage girls tend to be very picky and some of them may not even want to have a party. For many teenage girls, simply hanging out with their friends is what they prefer to do and that’s exactly what we did for our daughter when she turned 13.

Her “party” was more of an extended hang out session with a few party things thrown in. She just had a few friends over, girls she normally hangs out with the most. It’s best not to plan the party to death and leave plenty of open spaces for the teen to do their own thing. Chances are good that is what they will do anyways. The following is a list of fun teenage girl birthday party ideas that were a hit with my daughter and her friends.

A BBQ is always a fun option weather permitting and/or if you have a covered area to protect everyone from any potential rain. My daughter’s birthday was in late September so it was starting to get cold here but we had sunshine that day and no run yay. We did have a large covered area just in case it rained. I started my daughter’s BBQ early in the evening, giving everyone plenty of time to eat to their heart’s content. Once the darkness arrived, the BBQ gave way to a marshmallow roast over a fire, which was very popular with the teen girls. We just cooked the burgers for them, put out the food and drinks and left them alone, which is what they preferred of course.

They enjoyed the fire during the bbq and later when it got dark outside, they enjoyed hanging outside even when it was dark as we hand lanterns strung across the canopy. Between the lights and the fire they could see well enough and it had a whole camp out feel to it. You can see the lanterns in the picture below and as you can also see they enjoyed themselves, hanging out, goofing off a bit and eating. They also had music blaring outside the whole time, they each took turns hooking up their iPod or phones to the bluetooth speaker to play their music. 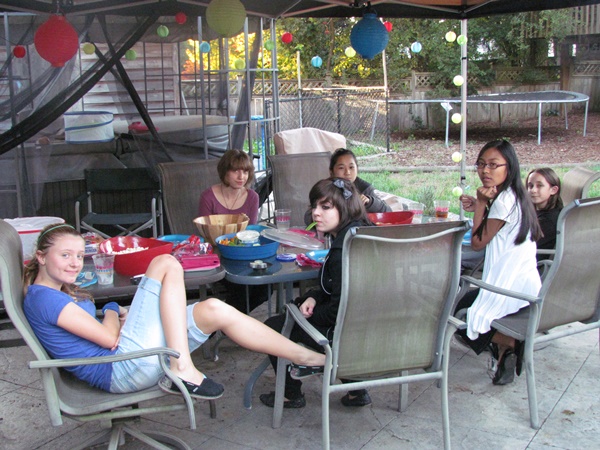 If you have enough space, this is something that can be done on your own property. Or if you live in a colder region, you can let them set up camp in your living room. For my daughter’s birthday they did not sleep outside, they slept inside.

Yep they even opened the presents outside, that’s how much they enjoyed the bbq. Apparently they are never too old for gifts.

Other than the BBQ, this was the only event that I took time to plan. All you need are some highlighters, some white T-shirts, white paper and some black light bulbs. The girls had a ball decorating their shirts and used the white paper to make their own cards. They all thought it was such a fabulous idea, they each spent a lot of time drawing on the t-shirts and they all signed each other’s t-shirts. With the white card stock they made notes to each other that could only be read in the black light.

black light activity. Picture with flash so you can see what is going on

The nice thing about the black light activity is that it’s fairly inexpensive. You don’t have to buy special pens just get a variety of highlighters (yellow is most vibrant but all colors work), thick and skinny ones, white t-shirts and a black light light bulb. I got all of those items on Amazon. We got the light bulb and a few black light flashlights. You don’t necessarily have to buy t-shirts either as we asked the girls to bring a t-shirt they didn’t mind drawing on, most of them did but we had a couple for those who didn’t have a white t-shirt. Even if you have to buy black light pens they’re cheap on Amazon. We did buy a few and the girls took them home with their t-shirts so that took care of a goody bag if you will 🙂

It seems so far no matter what age they are kids and yes even teenage girls still love cupcakes. My daughter loves animals so we had these cute animal themed cupcakes which were also delicious. Saves the mess and fuss with cutting cake and each girl selected their own cupcake.

I also bought some single cupcake boxes and since I ordered extra cupcakes (on purpose) each girl was able to take a cupcake home the next day.

Yep we lit up a few cupcakes, they still liked blowing out some candles 🙂

While this may seem boring to most, I have found that teenage girls will lose themselves for hours in assorted movies and music if you let them. For my daughter’s party, I allowed her friends to sleep over, giving them the whole night to spend on their own listening to their favorite music and watching their favorite movies. This is when hubby and I got to relax even more as we gave them some movies choices, they had the bluetooth speaker (with the rule of once it was after 11 the music had to be on low) and settled in front of the big screen tv with their sleeping bags. They watch a couple of movies and all I know is I feel asleep in my own room before they did. 🙂

The next morning the girls were still chilling and hanging out

Those were the fun teenage girl birthday party ideas that were a hit in our home. I hope you found them useful, I know these teens enjoyed them. Feel free to share your ideas below we love to read them!