The ultimate fun gift for kids! Available at Toys R Us

This motorized ride-on Range Rover is already in the US but imagine the surprise and delight of kids that get to see one of these this holiday season? I can tell you that even my daughter was pretty excited to try one out. She thinks it’s a blast that she gets to drive it up and down our street, she’s definitely get a small taste of what it’s like to drive a vehicle, just a little taste but she’s having a lot of fun and that’s what counts!

It did take my hubby over an hour to assemble it, and then another 15-20 minutes just getting all the stickers on and other little things, it goes quicker if you have help. However it’s all worth it as it is a darn cool toy, even my husband was a bit jealous, I think if he could fit in it and wasn’t over the maximum weight he would give it whirl around the block.

My daughter likes that it’s a two-seater so she can give on her her younger cousins a ride in it or the kids next door who are only 3 & 5 years old but she always insists that she’s the driver lol. She figures she could drive her Range Rover Powered Ride on the sidewalks all the way up the par about 5 blocks away, I’m sure it would make it there but we’ve told her we’d rather stick to our own street. Don’t want to give her any ideas of taking off for a cruise.

We always know where she’s driving without even looking (even though we’re always watching) as the car does make some noise on it’s own that’s when she’s not using the stereo system. You can see a short video below of her driving it.

The Avigo Range Rover Powered Ride On is a  12V Ride-On Vehicle and is based on the Range Rover Sport design. This luxury sport vehicle-styled ride-on features a foot pedal accelerator along with working doors, chrome wheels and chrome tailpipes. Kids can connect their portable music player to the vehicle’s sound system and rock out to their favorite tunes, and the start, engine and horn buttons provide cool sound effects.

As you can see this Range Rover Powered Ride On  is one cute toy and they can go up to 4.5 mph, that’s a darn good speed for kids car! 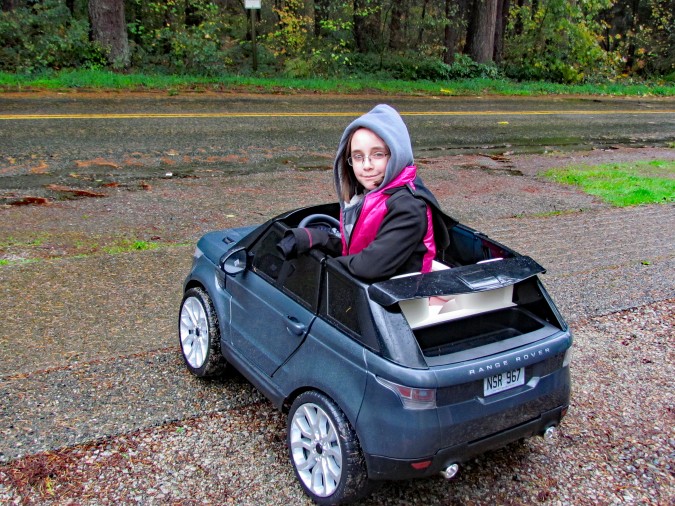 We had to share this video check out Kelly Ripa riding out on this same Range Rover Powered Ride On and she gets out in a pencil skirt no less. I wouldn’t have been abel to get out that gracefully.

Overall my daughter really enjoys this toy, after all she gets drive up and down the sidewalks no wonder she likes it. There are a couple of things that need improvement though. For very young children (it’s for ages 3 & up) you have to be careful because the doors do seem to come open on there own when going over any bumps. For my daughter it’s not a big deal, she’s old enough not to have to worry about anything like that. The only other thing is that I was it wasn’t as noisy when just driving it but I’m assuming that’s because it’s run on a 12V battery and it’s just working. Otherwise it’s an amazing luxury toy that any kid would be happy to have. 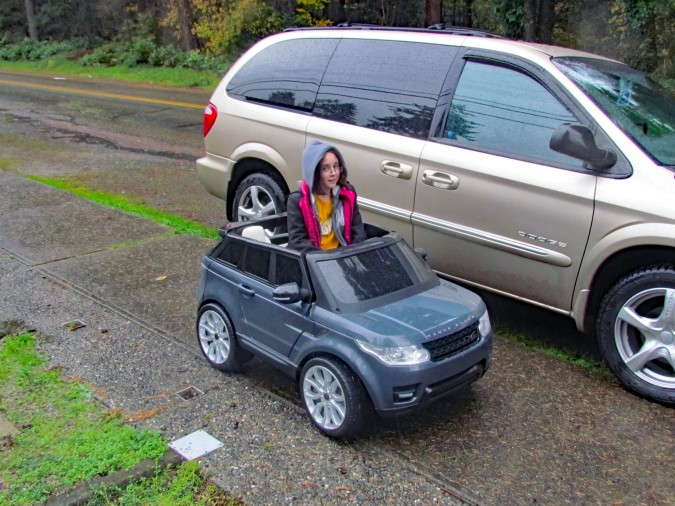 Check out the size of the Range Rover Powered Ride On next to the Caravan. It’s a good size and it can fit two small kids in it which is fun for all. If you’re interested in getting one or just want to find out more you can check it out on Toys R’ US HERE.