You’ll love the variety of food at these Seattle restaurants.

Looking for some Seattle restaurants for a delicious meal? Look no further.

These two Seattle restaurants located in Seattle Southside which is conveniently located right in Seattle’s backyard couldn’t be more different from each other. They both have menus with tons of choices and everything we tried was delicious. I warn you though you will have a hard time deciding what to order, so many tantalizing choices at both Famous Dave’s BBQ and Moctezuma’s Mexican Restaurant & Tequila Bar – at Southcenter restaurants. We left both of them completely stuffed and took home leftovers!

Both restaurants as mentioned had such amazing food that I still dream about it. We’ll start with Moctezuma’s Mexican Restaurant and Tequila Bar since it as the one of the very first Seattle restaurants that we visited in Seattle Southside. We went there for dinner, it’s has great ambience, lovely decor and it could be both a casual night out for the family or the perfect place for date night. As it had dinner lighting there were some challenges getting the lighting just right in the photos but I think their food will still shine through.

The hospitality and authentic flavors of Mexico are behind everything they do at Moctezuma’s earning accolades from South Sound Magazine every year since 2013, including “Best Mexican Restaurant.” Their menu features homemade, family traditions carefully crafted with both old recipes and new, where everything is made from scratch and is focused around authenticity and quality ingredients including a great selection of vegetarian and gluten-free options.

To give you an idea of the festive atmosphere I’m sharing this quick video I took when we sat down. It’s dark, again dinner lighting but you can hear the music in the background. You’ll hear all the happy people and even watch some food on fire, don’t worry it’s on purpose.

Their menu was extensive, we had a hard time deciding what to eat so we got some recommendations from our fabulous server. This yummy deep fried chicken enchilada (chimichangas) dish was supposed to be an appetizer. It was huge, it could have been a main meal.

My hubby has a thing for Caesar salads and here he was asking for one at a Mexican restaurant. I admit I mocked him a bit for asking for it but I ate my words. They brought out this delicious salad and instead of croutons it had strips of tortilla chips. OH MY GOODNESS one of the best Caesar salads I have ever tried. I no longer want to use croutons on Caesar salads I loved it with the tortilla chips and they weren’t heavy on the dressing which is also my preference. Hubby the Caesar salad, self appointed expert thoroughly enjoyed it.

Naturally had to try one of their dishes that came out hot, you know flames and all and that’s what we got. It’s one of their tequila pairings (hence flames) with chicken, beef and prawns.

You got fresh tortillas and amazing toppings with it too.

Our table was by no means small but we were running out of room for all the food. This was fast becoming one of our new favourite Seattle restaurants, heck one of our favourites anywhere.

Even though we were stuffed to the gills the Manager of the restaurant and our server said we couldn’t leave without trying one of their desserts. So at our server’s suggestion we went for the Plantain Flamead. Caramelized plantains in a sweet rum sauce over a blonde brownie topped with coconut ice cream and fired up at your table with rum.

The end result? See for yourself, ice cream, yep still lots left, bananas, addicting sauce and flavours, check, check oh my goodness so amazing. The coconut ice cream alone was so delicious but then I’m a sucker for anything coconut. My tastebuds were in absolute heaven. We all sighed with contentment. I just can’t compare this dessert to anything I’ve tried in any Seattle restaurants or any restaurants anywhere I should say.

The menu as I mentioned has so many options and even though we stuck to tequila in the food, if you’re not driving and like it you should check out their extensive tequila bar.

We didn’t get to try this one but here’s a gluten-free option I just had to share.

Raised by Southern-born BBQ lovers in a world of street-corner barrel smokers, Famous Dave spent 25 years visiting thousands of BBQ joints. After decades pulling his own all-night cooking sessions, he felt he was ready to open his own BBQ place in 1994. They’ve consistently been chosen as America’s favorite BBQ restaurant. To date, they’ve won more than 700 awards!

Hubby heading into Famous Dave’s in Tukwila (Seattle Southside) as he figured this was his kind of food.

I have to admit, not having heard of Famous Dave’s BBQ before I wasn’t sure if I would like the food. I’m not a big fan of slathering my food in BBQ sauce. I was worried that everything would be covered in it. Turns out I had no need to worry and I discovered there are some BBQ sauces that I love!

We arrived at 1:30pm and were a bit worried when it wasn’t very full. However, I’ll mention now that by the time we left the place was packed. Apparently late afternoons Famous Dave’s is the place to be. It had some fun decor with hilarious sayings on the wall, vintage signs and more.

All of the servers had hilarious phrases on their shirts. My favourite is the one below that our awesome server was wearing. They kind of have a point if you ask me.

My father-in-law joined us for Famous Dave’s as he lives in the Seattle area, we figured he would love the food here. The menu was extensive and since we had three adults and a teenager in our party we went for a feast. The All American Feast that is. Oh my goodness!

They do not exaggerate when they call it a feast. When they bring out this feast your eyes may just pop out of your head! 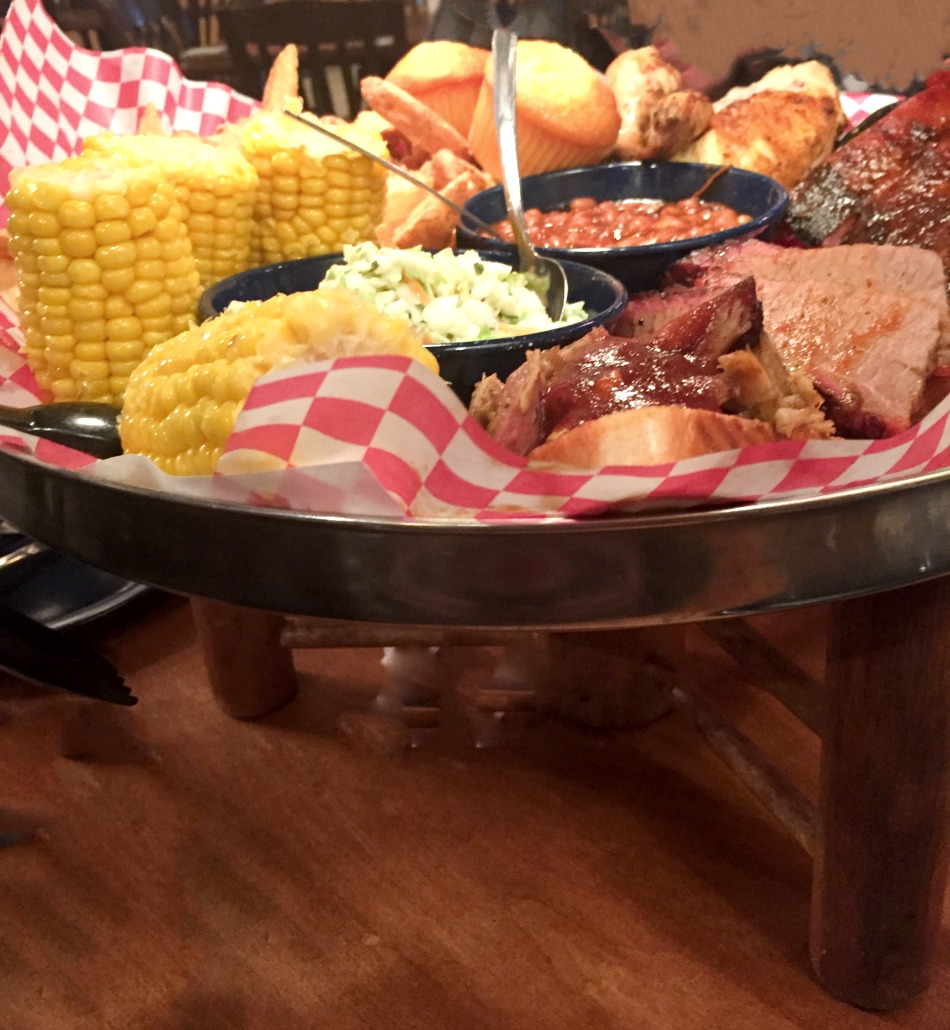 There was something for everyone in this feast including my picky eater! She ate the roast chicken, corn and the corn muffins and fries of course. I actually liked the bbq sauce on the chopped pork. Low and behold I also tried some other bbq sauces they had at the table. With names like Devil’s Spit and Rich & Sassy how could I not?

I can’t believe I’m going to say this but EVERYTHING on that gargantuan tray was tasty. I liked everything I sampled. My daughter gave her approval for the fries and roast chicken. Hubby and his dad liked it all so it was a win AND we had enough food leftover to snack on later, we didn’t need dinner that night.

Okay Famous Dave’s you won me over. When I told my various friends who live in different states in the US we went to Famous Dave’s I heard a lot of proclamations of  oh “I love Famous Dave’s”. Now I know why! Hearty food with lots of flavour, if that’s your cup of tea (it’s mine now) or bowl of ahem pork you’ll want to head to Famous Dave’s! Check it out HERE for their locations all over the US.

I told you I wasn’t kidding when I said you need to take the family to these two Seattle Restaurants. You won’t regret going to either one!

If seafood is your thing you should check out these fabulous Seattle Seafood restaurants that we went to during this same visit. GO HERE to find out all about them!

Now I’m hungry so I’m off to settle for a boring sandwich.